If you work in publishing or at a bookshop you will already know about the shortlist and have seen tables piled up with the six shortlisted books. For everyone else, it depends on whether you read books and if you do how much you know or care about big literary prizes. I’ll assume you have a passing interest…

The Booker (no one I know would call it the ‘Man Booker’ as the ‘Man’ sponsor was only added in 2002) is seen as equivalent to the Oscars in terms of sales and prestige. Despite this the prize has always been followed by controversy, which I would suggest is the same with the Oscars. Booker judges have been accused of choosing a bad winner, having a conflict of interests (e.g. being in a relationship with an author?) or always choosing men (since the prize started in 1969, 30 men and 16 women have won the prize). It’s probably getting better as Hilary Mantel has won twice!

I have to admit that I haven’t read loads of the Booker Prize novels, but one that I have read is the 1978 winner, Offshore by Penelope Fitzgerald. It’s set in the 1960’s and is about a group of people living in riverboats on the Thames. The selection of Fitzgerald’s book as a Booker winner was criticised at the time as the novel is fairly short and the story is concentrated on domestic issues like family life, relationships, outsiders and how poverty can decide whether you sink or swim. I found it wonderful, a great evocation of the times and often very funny. I also love the fact it’s partially based on her own life with her two young daughters on a barge that sank! 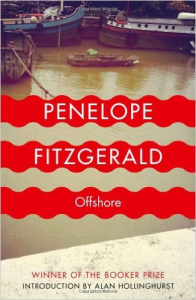 Penelope was also very inspiring as she didn’t start writing novels until she was sixty. More on Penelope here: http://www.theguardian.com/books/2013/nov/17/penelope-fitzgerald-biography-hermione-lee